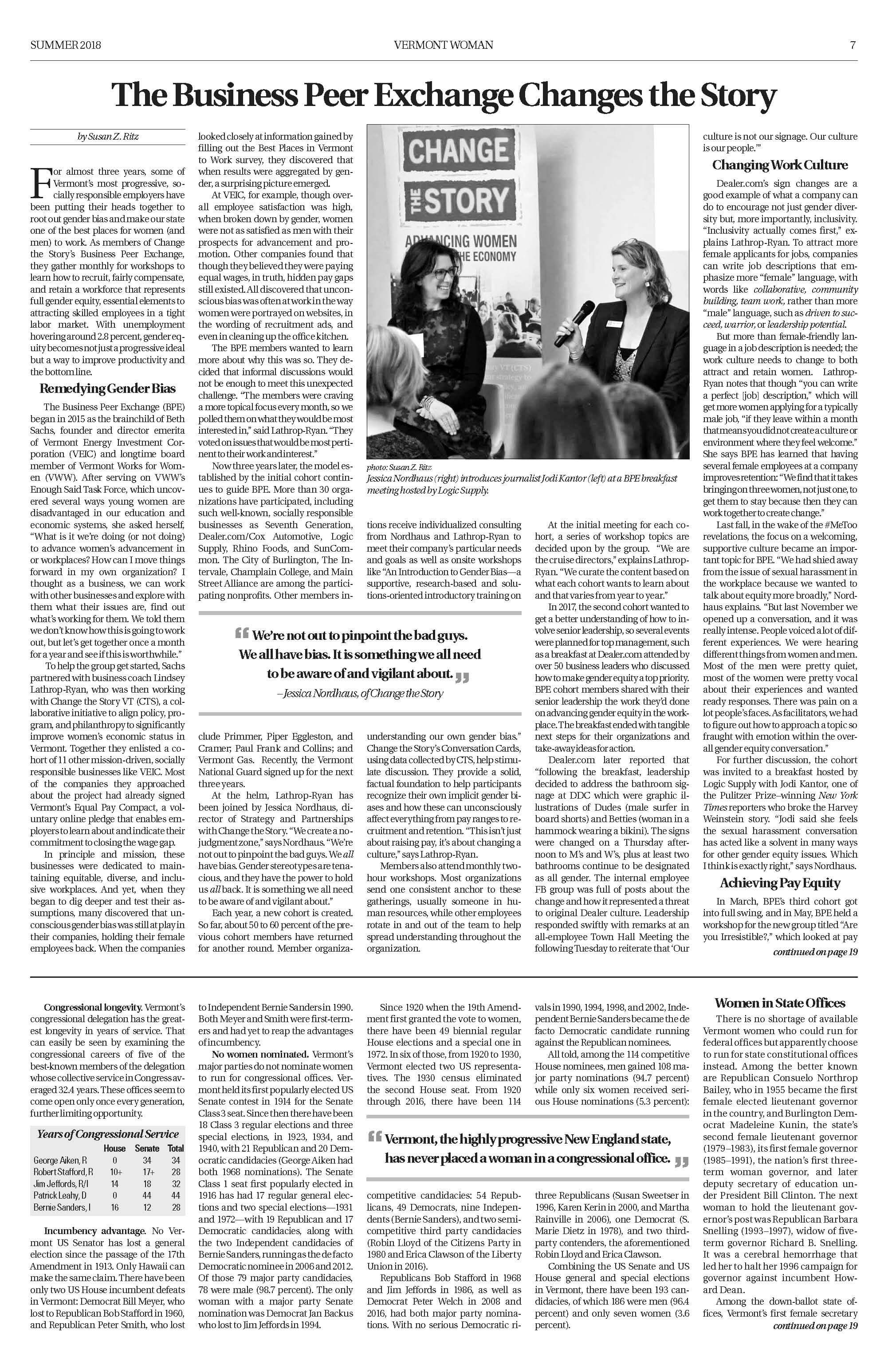 “For almost three year, some of Vermont’s most progressive, socially responsible employers have been putting their heads together to root out gender bias and make our state of the best places for women (and men) to work. As members of Change the Story’s Business Peer Exchange, they gather monthly for workshops to learn how to recruit, fairly compensate, and retain a workforce that represents full gender equity, essential elements to attracting skilled employees in a tight labor market. With unemployment hovering around 2.8 percent, gender equity becomes not just a progressive ideal but a way to improve productivity and the bottom line.” 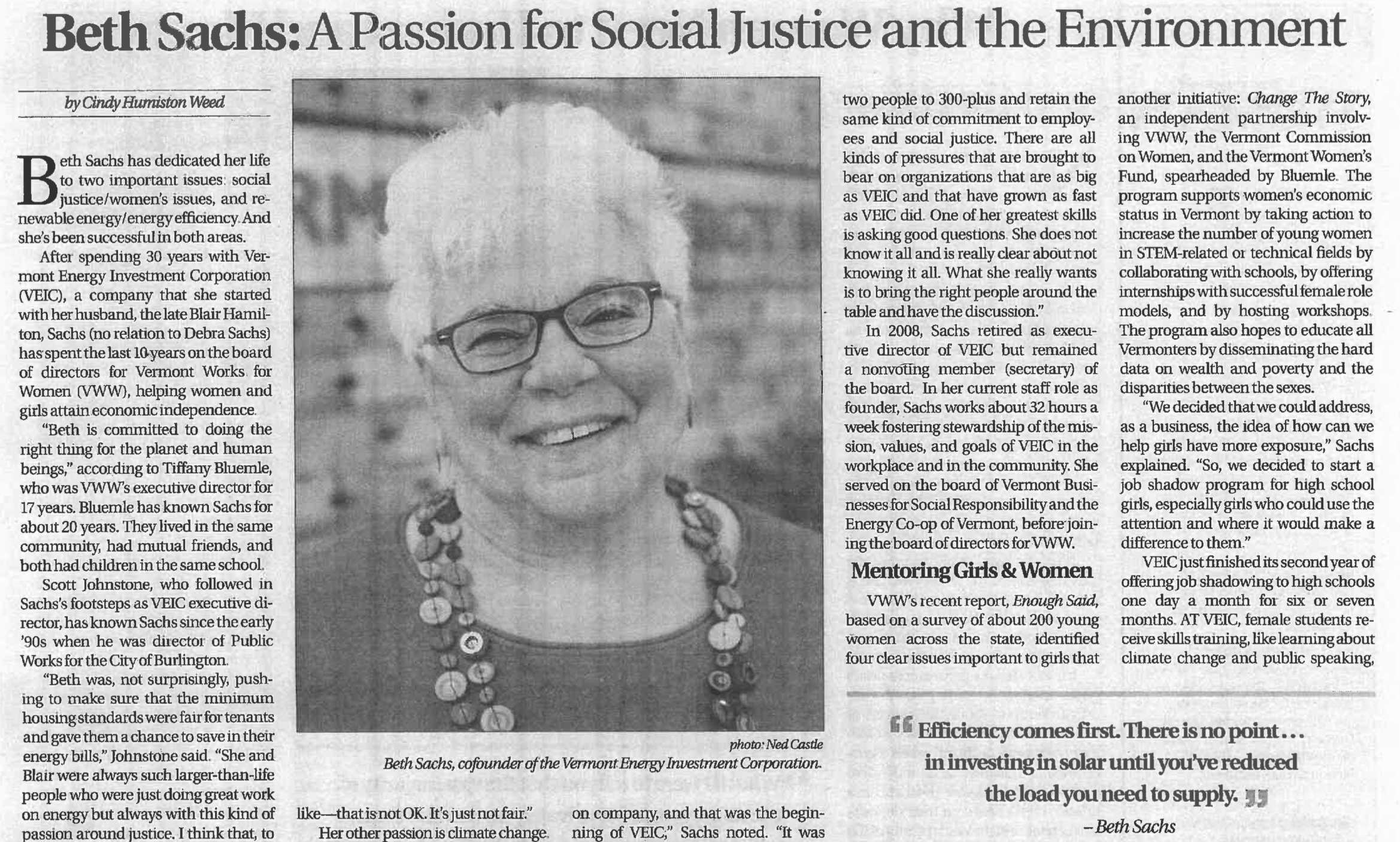 Vermont Woman – Beth Sachs: A Passion for Social Justice and the Environment

“Beth Sachs has dedicated her life to two important issues: social justice/women’s issues, and renewable energy/energy efficiency. And she’s been successful in both areas.

After spending 30 years with Vermont Energy Investment Corporation (VEIC), a company that she started with her husband, the late Blair Hamilton, Sachs (no relation to Debra Sachs), has spent the last 10 years on the board of directors for VT Works for Women (VWW), helping women and girls attain economic independence.”

“Sachs has jumped into action with another initiative: Change The Story, an independent partnership involving VWW, the Vermont Commission on Women, and the Vermont Women’s Fund, spearheaded by Bluemle. The program supports women’s economic status in Vermont by taking action to increase the number of young women in STEM-related or technical fields by collaborating with schools, by offering internships with successful female role models, and by hosting workshops. The program also hopes to educate all Vermonters by disseminating the hard data on wealth and poverty and the disparities between the sexes.”

“At a time when we’re increasingly concerned with economic inequality, Vermonters might want to consider the difficulties faced by 51% of our state’s population – women and girls.

A recent report on Women, Work, and Wages in Vermont, issued by Burlington-based Change the Story, reveals that women of all ages constitute a larger percentage of Vermont’s low-wage workers than men, despite having achieved a higher level of education than their male counterparts. Median annual income for women working full-time is $37,000 – $7,000 less than that of men. That averages out to a wage gap of sixteen cents on every dollar.

And the gap is across the board:  those in high-end jobs like corporate executives earn only two-thirds of what men do; female nurses and medical technicians earn 17% less than males, despite comprising over 80% of those so employed.

Vermont women are more likely to live in poverty than men. Of those working full-time, 43% don’t earn enough to cover basic living expenses. The poverty rate of families headed by single women is nine times that of married couples. And, in their senior years, Vermont women’s median annual income from Social Security is half that of men.

These facts should force us to look beyond the mere existence of economic inequality to understand just how much of it is gender-based. And we should consider how much of a burden this places on state subsidies and benefits funded by Vermont taxpayers, a burden likely to grow unless something changes.

We should demand that legislators and state officials pay attention to gender when considering legislation or framing and implementing policy. They could begin by asking one simple question:  Who benefits?

For example, economic development projects should provide opportunities for women as well as men and workforce development investment should be gender sensitive. In fact, all decisions about state policies and programs should be considered in the light of gender.

Happily, at a time when economic inequality is the focus of national attention, Vermonters can actually do something about it, right here at home.” 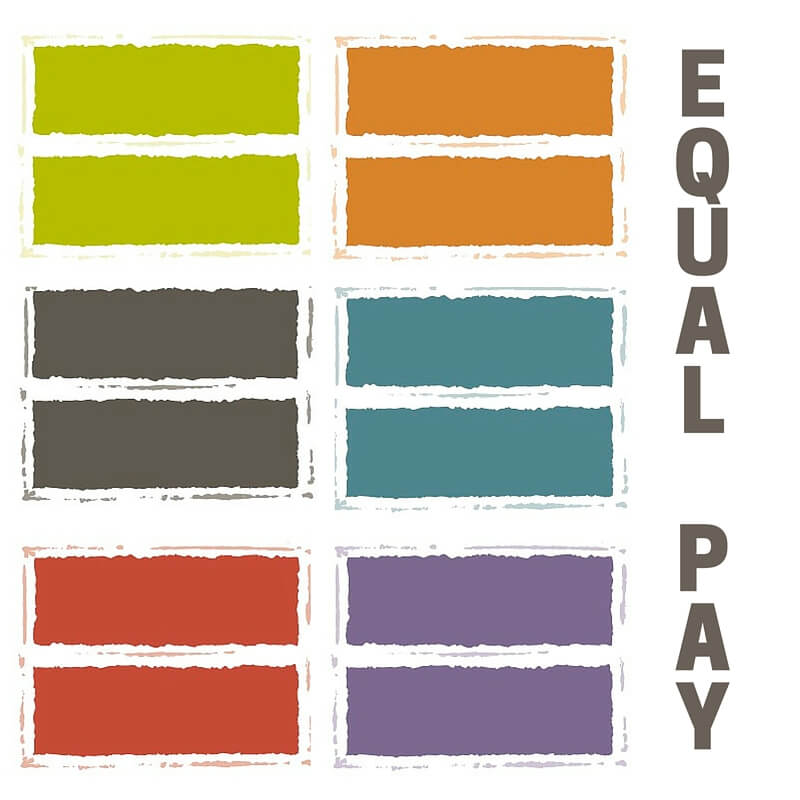 In Vermont, median annual income for women working FT year-round is $37,000.
That’s $7,000 less than the median annual salary earned by men. This translates to a 16% wage gap in Vermont.
On the morning of April 12th, the Vermont Commission on Women will joinBusiness and Professional Women, the League of Women Voters, members of the Women’s Caucus of the legislature, and other policy leaders at the Vermont State House for Equal Pay Day.
At 10:00 a.m. the Vermont House of Representatives will be called to order and soon after a resolution honoring Equal Pay Day will be read.  At 11:00 a.m. the Governor will sign an Equal Pay Day proclamation in his ceremonial office.
All are welcome to join us!
Get the latest stats and information about Vermont’s wage gap: read our latest report: 2016 Status Report: Women Work and Wages in VT.

Join us for the VT Women’s Fund Annual Fundraiser on May 3!

Join Us for the Vermont Women’s Fund Annual Benefit Celebration

The Davis Center at the University of Vermont, Burlington
Directions & Parking Information